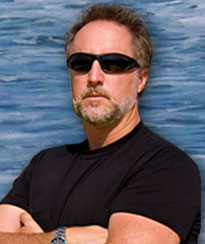 Tres started the first successful race boat out of Everglades Marina named “RAZZ” a 41’Apache in which he won the 1988 World Championship. The following year Tres ran another successful race boat out of Everglades Marina named “LITTLE CEASARS PIZZA” a 47’ Apache Superboat with triple 1000 HP motors which went on to win the 1989 World Championship where Tres became the youngest Thottleman to win in Superboat Class.  In 1993 Tres built “INXS” a 47’ Fountain with triple 1000 HP motors that WON 11 out of 13 Races on a National Circuit clinching the 1993 National Title in Superboat.  Tres repeated the same performance in 1994 in a 45’ Fountain “INXS”.  After 16 years of dedication Tres resigned from Everglades Marina and started his own company “Martin Offshore Inc.” The business was very successful as Tres is very dedicated to his customers, who rely on his knowledge, amazing skills in the boat, and reputation.  Each boat that came to Martin Offshore received Tres’s personal touch.

In 1999 Tres was approached by the Cigarette factory about participating in a few races which were done successfully.  In 2000 Tres was approached by one of his customers, Todd Klindworth, to build a 38’ Cigarette name “TEAM VIRGIN” and the following year a 36’ Gladiator and a 40’ MTI Catamaran which both boats were raced back to back on the same day.  That same year they raced in the new V-24 – One Design Class on Saturdays where all of the boats were prepared 100% equally – where the skill of the driver and throttleman alone.  This feat has forever labeled Todd and Tres the IRON MEN OF OFFSHORE.  In 2001 they won the National and World Title which led to both of them being inducted into the APBA Hall of Champions.  Since 1986 totaling more than 66 checkered flags, Tres has won 4 National and 4 World Championship Titles from Factory Class to Superboat.  Throughout his career, Tres has always been in the top 3 in National level in points.  Tres was also named Throttleman of the Year three times.

Some of Tres’s hobbies are motocross, horse riding and showing, Harley’s, snow skiing.  Most important in his life are his children and a very special woman name Jacky McDaniel who helps facilitate and runs the day to day operation for both Tres Martin Performance and Tres Martin’s Performance Boat School which was established in 2004 when Tres felt compelled to bring his knowledge to those who needed it.