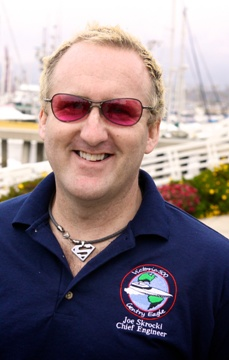 Joe has an expansive racing resume dating back to childhood.  He has been racing as a professional for almost 20 years.  Skrocki came to offshore racing from the AMA 250 GP Pro Circuit in 1995.  He has always been focused on how things so work, so it’s no surprise to see he spent 13 years at Ford Motor Company Engineering and Development.

Skrocki has won both APBA/UIM World and National Championships and stood on the podium in every premier class in North America.  By 2004, he had won more F2 races than any other racer in history earning him a seat in the APBA/UIM Hall of Champions

In 2008, Skrocki found himself sitting in one of the fastest offshore race machines on the planet.  The Unlimited Offshore 50 foot catamaran powered by two attack helicopter turbine engines producing over 4000-hp.  While there are only a handful of people in the world to ever take an offshore race boat to 190-mph in a straight line, Skrocki went on to win races in the 2009 Unlimited Offshore Class at race speeds over 190-mph!

When Joe is not racing, he can be found ice climbing in the mountains of Canada and Alaska, staking claim to new first ascent routes, running his elite bicycle shop, or maximizing the potential of those who have sought him out from different parts of the world.  In any case, you will find him establishing the limits and finding his way into the history books no matter what the task-at-hand.