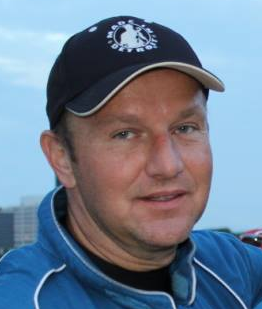 Jeff has over 30 years of performance boating experience and has been a professional boat racer for over 10 years, racing both Offshore and Tunnel boats.  Originally from the great lakes state of Michigan, Jeff started his professional racing career in the offshore classes with Factory II team Voodoo racing as throttlemen in 2000, where his team was voted the favorite factory team of the APBA.  In 2001, Jeff joined forces with NHL players and “Let’s Play Racing” team owners, Kevin and Darian Hatcher, and over several years the team racked up numerous titles and podium finishes, highlighted by winning the 2003 APBA Factory II Offshore World Championship.   As an F3 tunnel boat racer with Pilot Racing, Jeff was voted the TCPBA 2011 rookie of the year and finished top four in the nation in both 2011 and 2012, as well as top three in the North American Championships in 2012.